One, two or three bottle packs.

Custom packaging can be arranged.

With the Wisteria in full bloom, Spring is upon us!

And “Bud Burst” in the Pinot Noir not far behind! 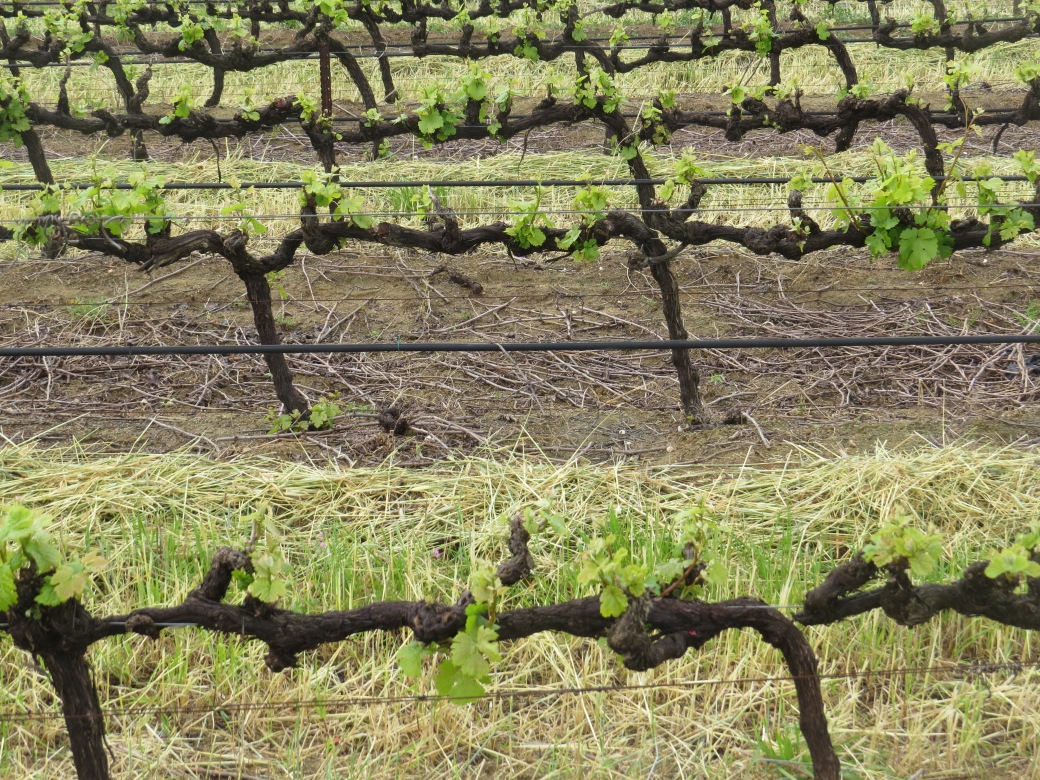 Did you notice the stick insect (Phasmid)?

Suckering is the next major vineyard activity, where excess shoots are removed. 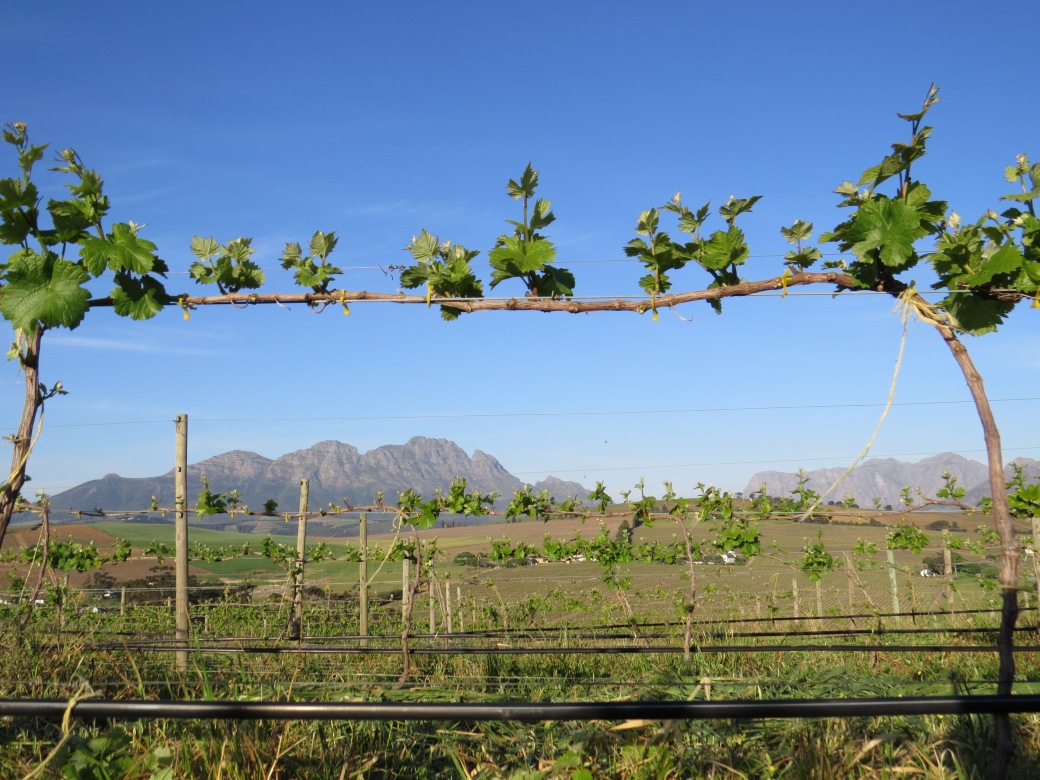 Again the focus is on restricting the crop to maximize fruit quality. You can’t make good wine from poor fruit!

And of course we get a little after hours suckering assistance from the elusive Grysbok! 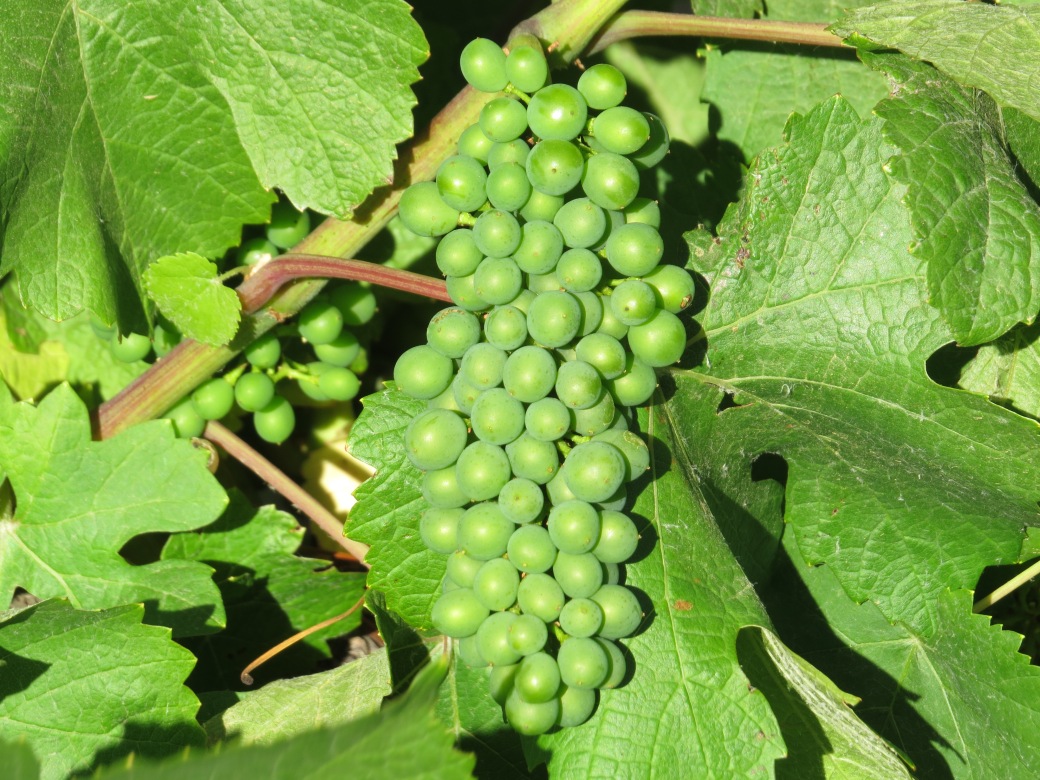 Canopies are managed throughout the growing season to ensure free air flow and exposure to sunshine without burning the bunches.

Veraison sees the onset of ripening

With Pinot Noir being our first cultivar to ripen.

And when the March Lilies bloom, the Cabernet Sauvignon is well on its way to optimal ripeness. 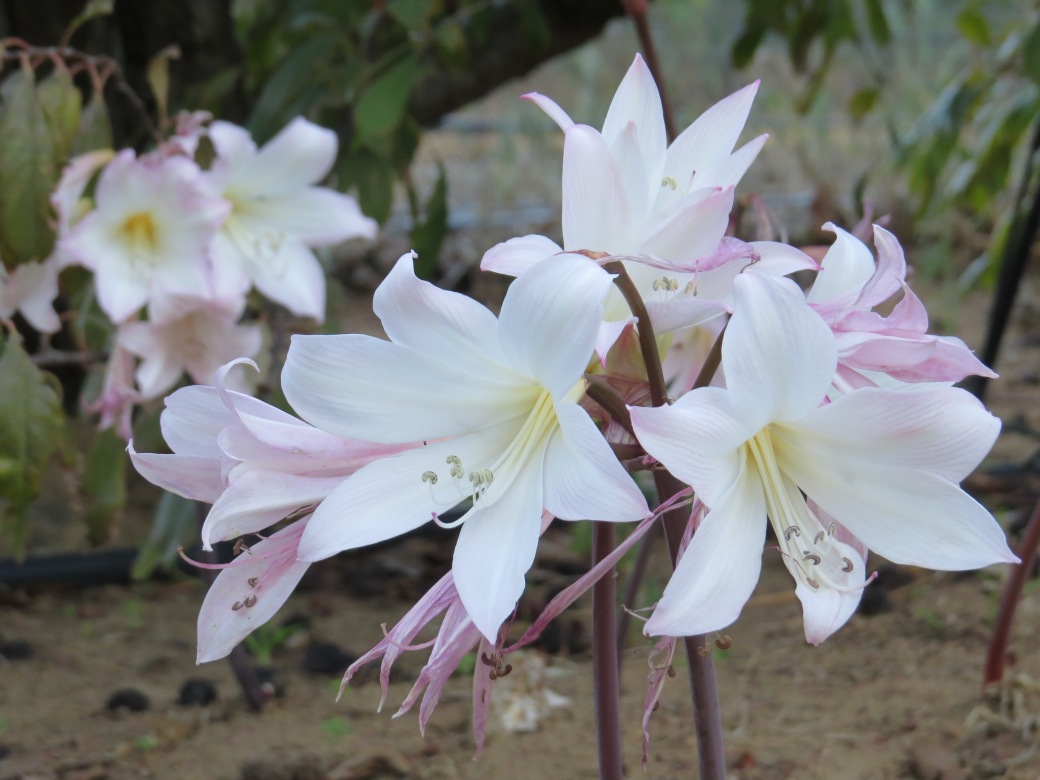 Grapes are harvested by hand into crates

And delivered to the cellar for pressing and fermentation.

And then to slowly mature in French Oak barrels.

After the harvest the vines continue to take up nutrients, creating carbohydrate reserves needed to develop early shoots in the following spring.

Shortly after this the leaves drop and the vines enter a period of winter dormancy. 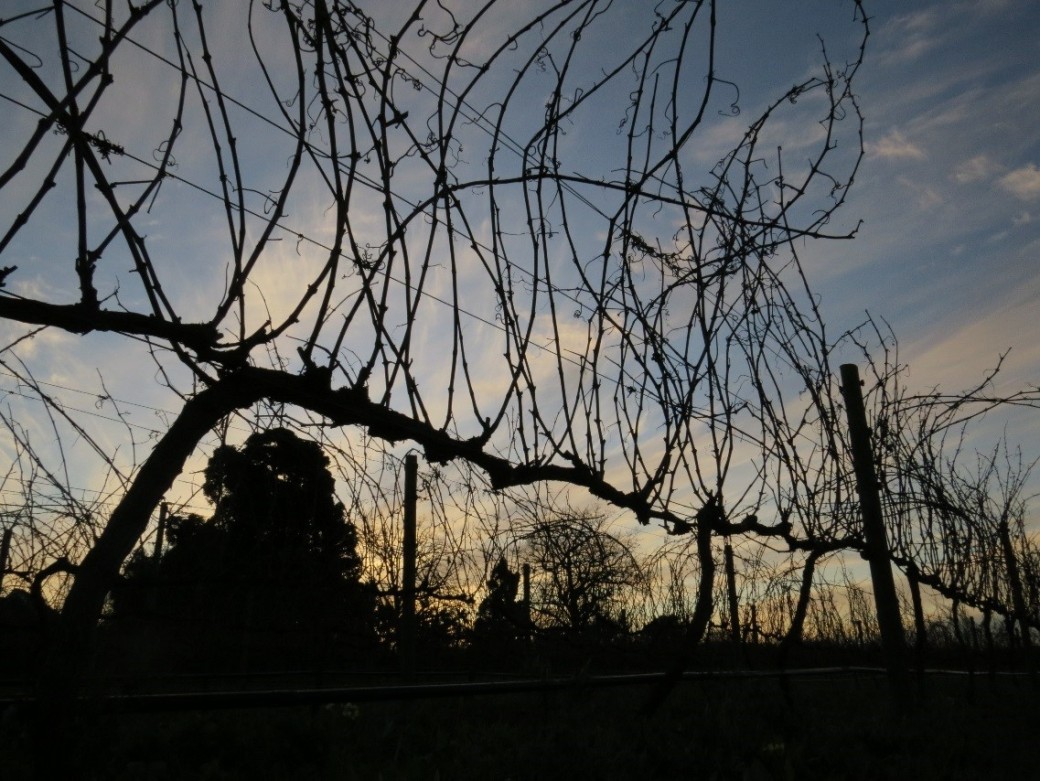 Winter is the time to nourish the soil by planting cereal or legume cover crops. We plant the cover crop in every second row on annual rotation. Pruned vine canes are dropped in the unplanted row. 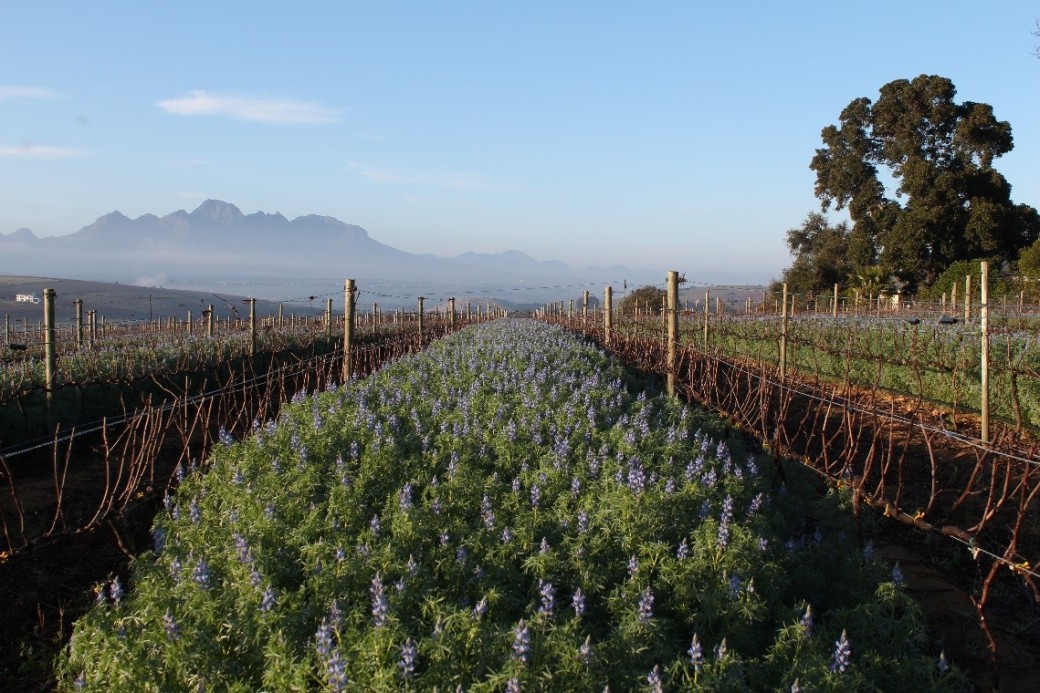 A healthy cover crop enriches the soil. It is not harvested but is left in the vineyard to contribute to a carpet of organic matter. This assists in suppressing weed growth and importantly helps with water retention in the hot summer months that follow. 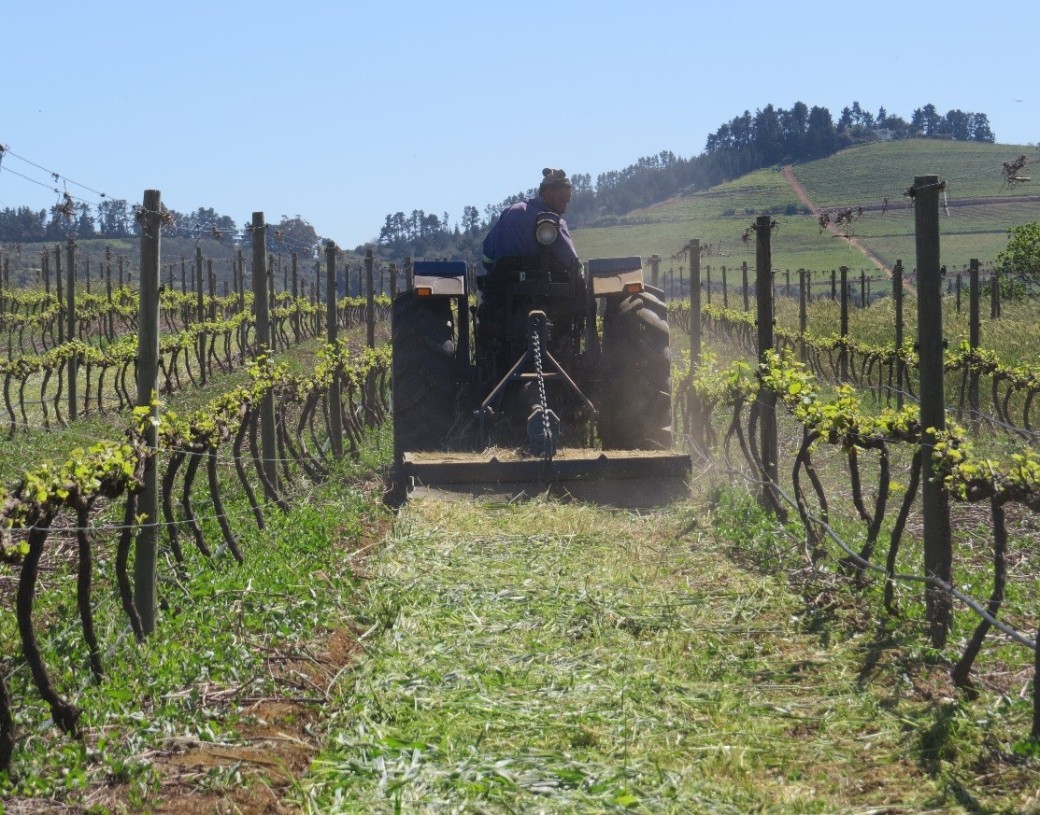 Winter is also the time for pruning.

We prune manually in three stages, with the key focus being on restricting the crop to maximize fruit quality. You can’t make good wine from poor fruit!

During July we remove excess growth in a “brush cut” operation. 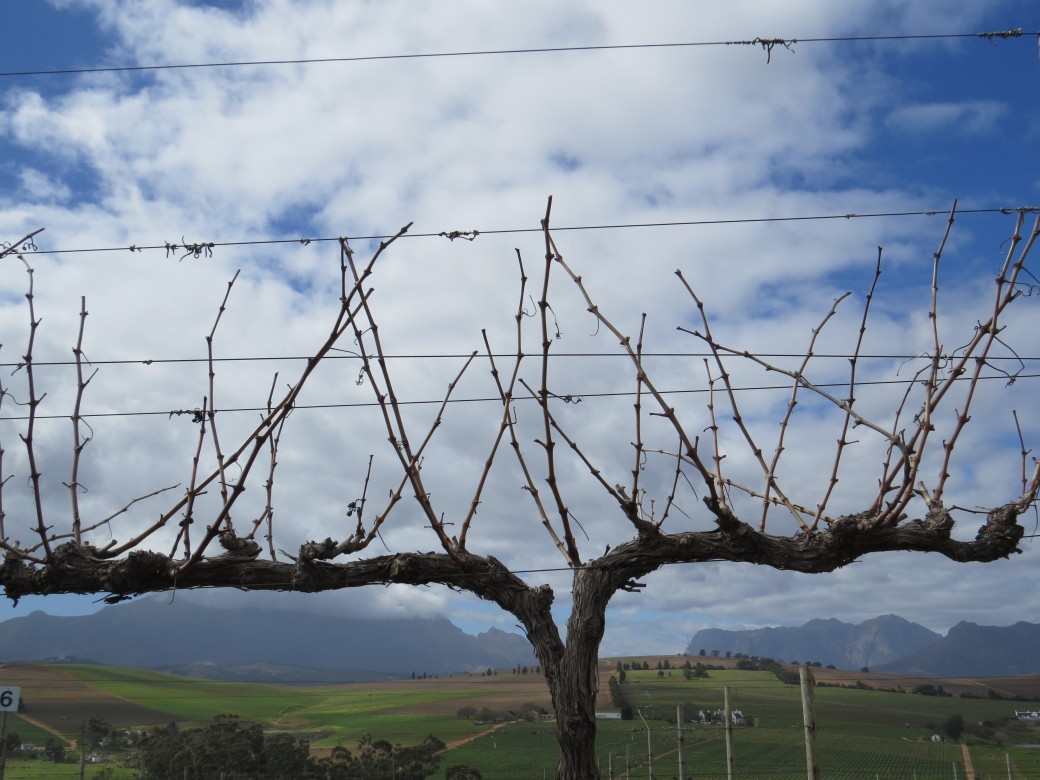 In the second step around mid-August, next year’s bearers are selected in the “clean pruning” operation. 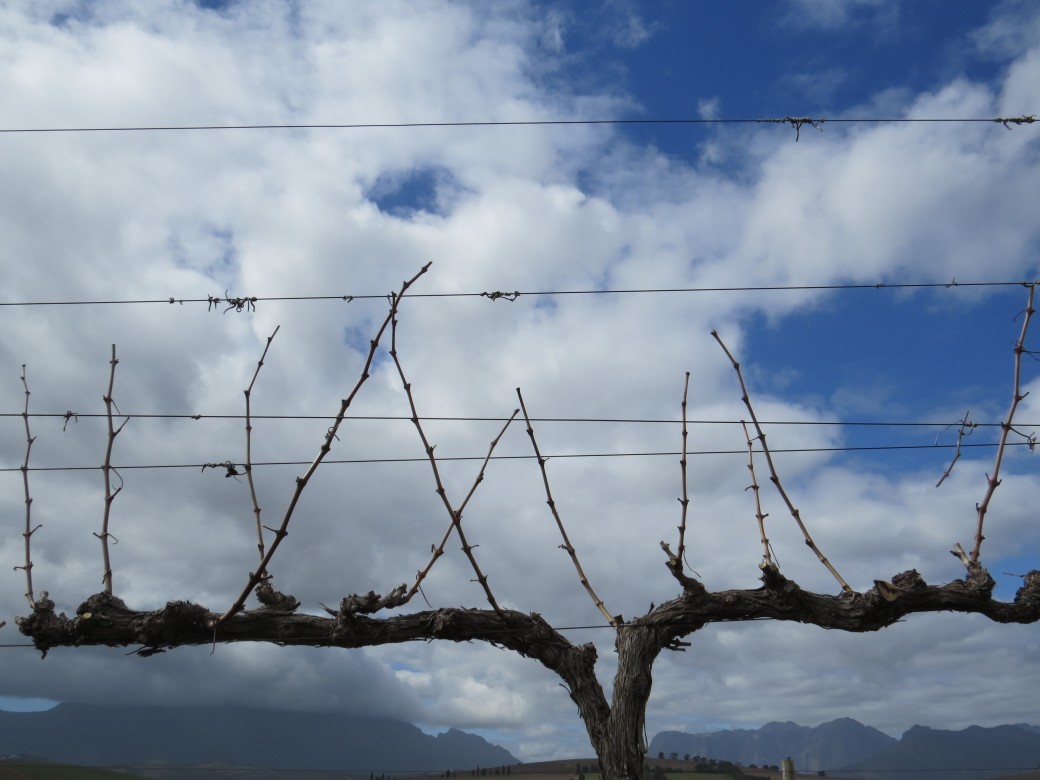 Finally, towards the end of August/ early September, selected bearers are cut back to two-bud spurs.

Shortly after our arrival on the farm in 1964, I accompanied my Dad to a livestock auction near Bellville in search of a draught horse to work in the vineyards. “No pull no pay” declared the auctioneer, as my Dad successfully bid for Sussie.

It soon transpired that Sussie was in foal. I don’t recall whether it was just before the end of the year or just in the new year that Justin, a strapping young colt, was born.

On the farm, Sussie’s main function was to plough a furrow on both sides of the vineyard rows, the so called “bankie”, from which the weeds were later manually cleared or “geskoffel” using a long handled spade. After delving into family albums we found the photograph below which, with some technological wizardry, was converted to digital format. A little unclear but one can see Sussie ploughing a “bankie”, with Justin getting an early introduction ahead. 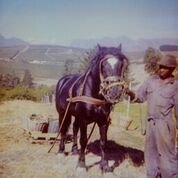 It was however, time for mechanisation and we soon acquired a 1949 Ferguson tractor, locally known as the Vaaljapie. 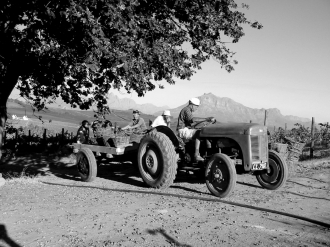 After years of working in the vineyards and trundling 2.5 ton loads of grapes to Stellenbosch Farmers Winery, our Vaaljapie was retired. 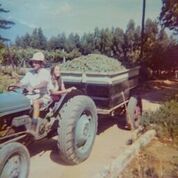 Fortunately, I not only have photographs, I still have the real thing! 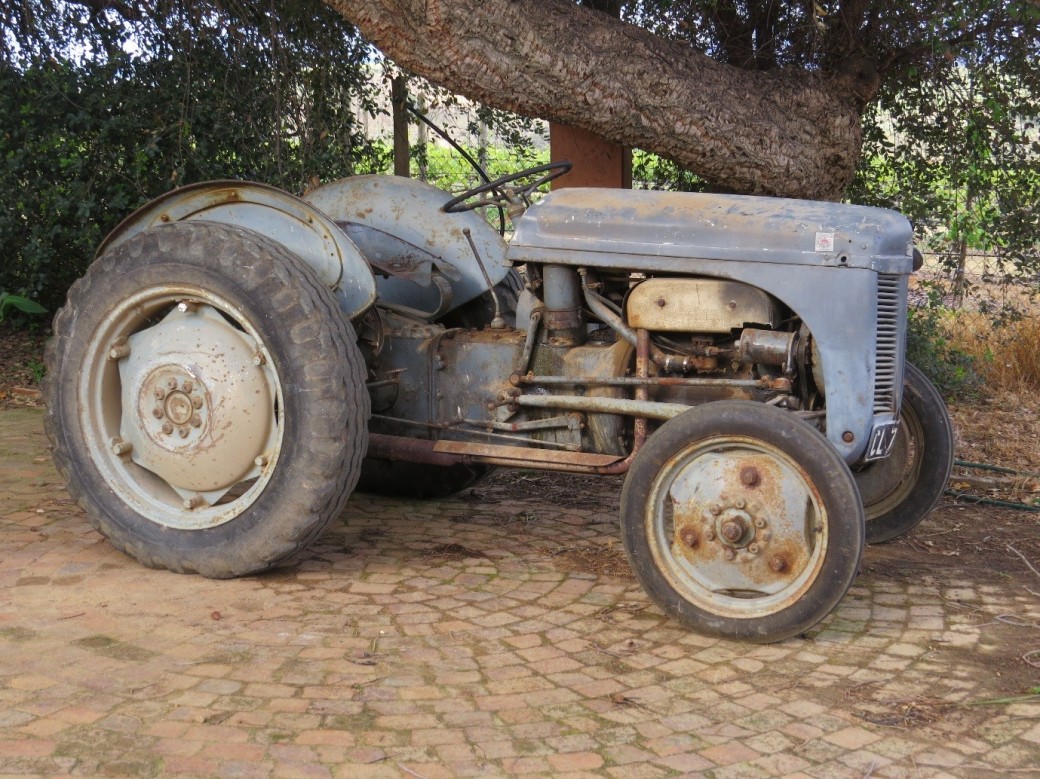 And so began a refurbishment project. 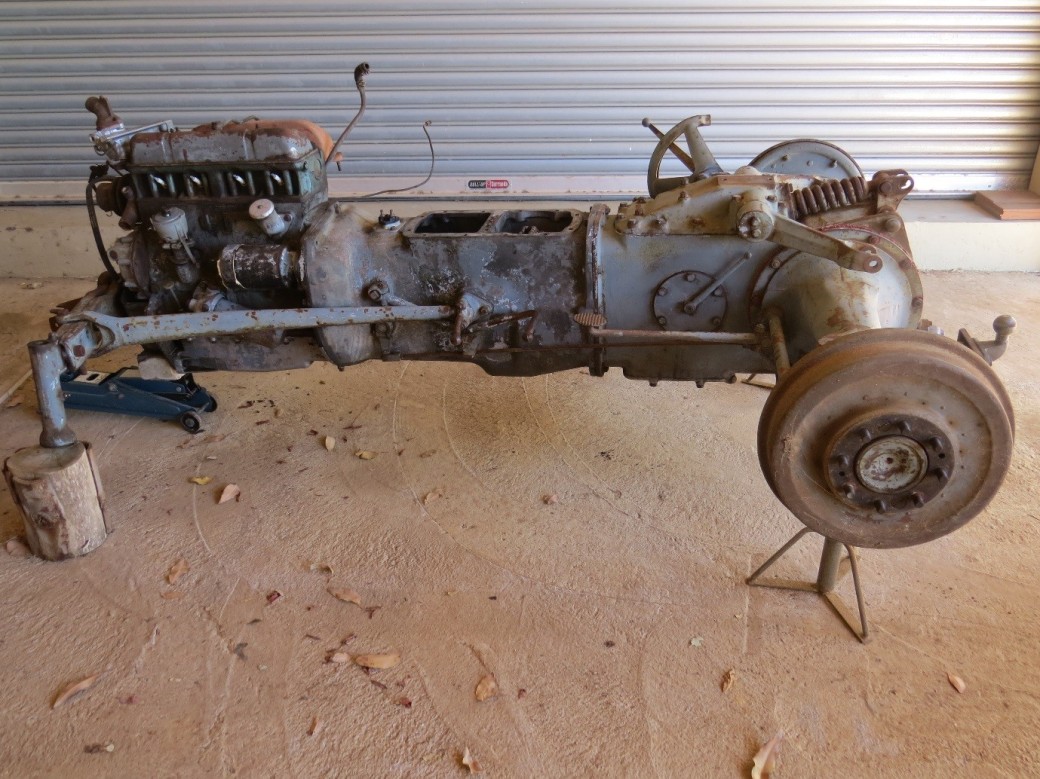 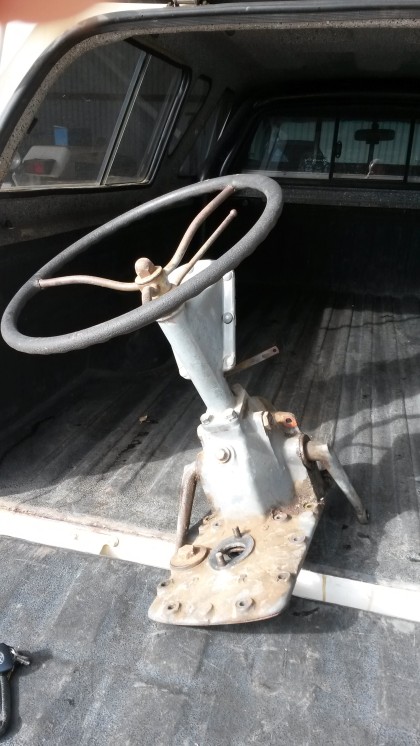 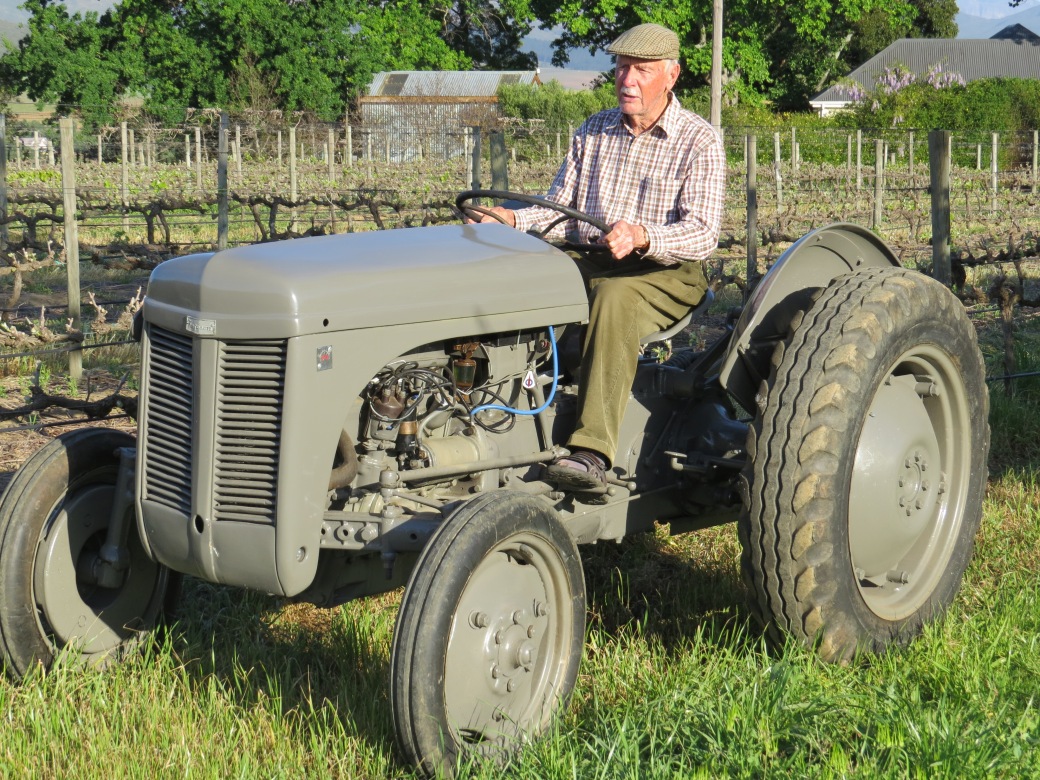 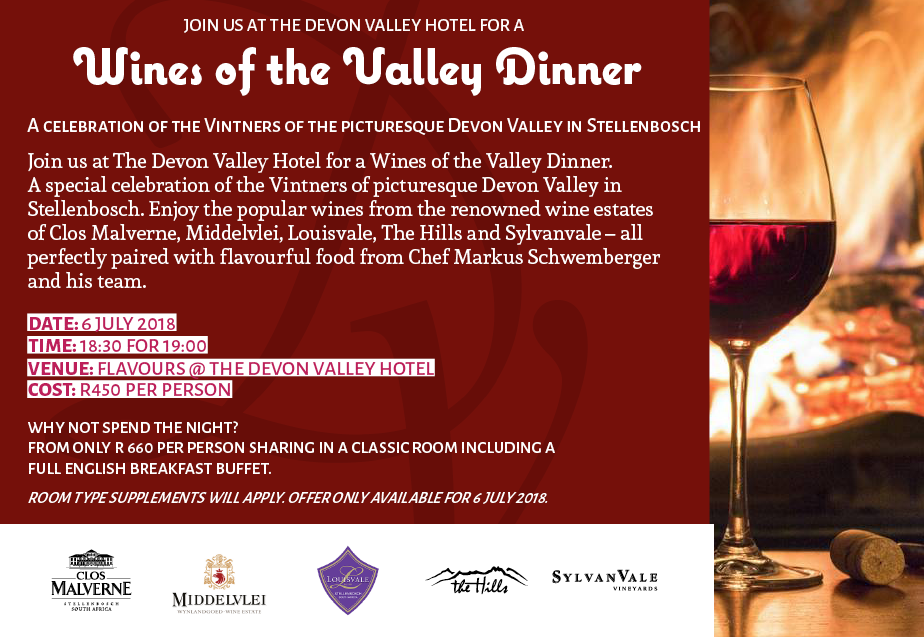 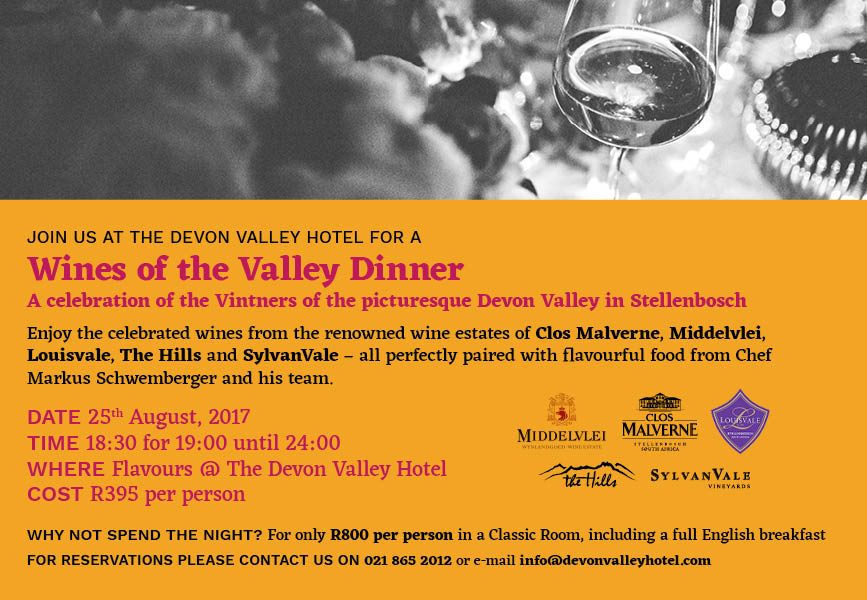 Great wines and delicious dishes made for a memorable evening! 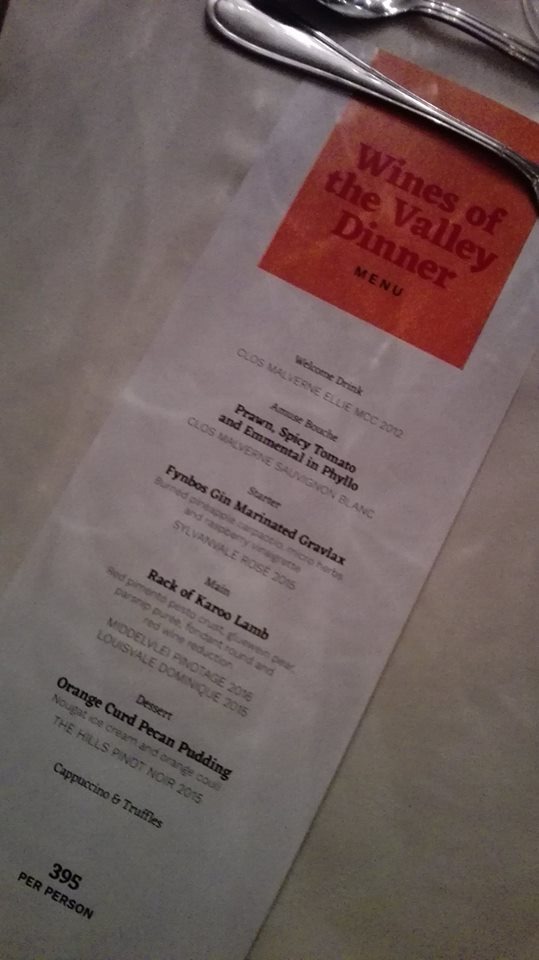 And an interesting finale, with our Pinot Noir 2015 paired with the sweets!